What is French Press coffee?
How to brew a perfect cup

All you wanna Know about Frecnh Press!

French Press or coffee plunger or coffee press or La cafetiere there are many different names used for this exceptional coffee brewing method across the World.

A French press is a simple yet elegant way of brewing coffee. It is considered one of the best ways to get a rich and bold taste with less acidity in your cup. The process of brewing coffee with a French press starts by adding coarse-ground beans in the carafe, then adding hot water and letting it steep for 4-6 minutes before pressing it down with the plunger.

French Press is the most economical coffee brewing method, which is pretty easy to use. Anyone with minimal expertise can brew a perfect cup of coffee through this method.

Let’s go through the history of the simplest and most widespread type of coffee maker across the World.

How does a French Press work?

French Press coffee maker has the simplest design compared to all other coffee brewing methods. It consists of a simple jar made of steel, glassware, or stone and a plunger assembly that contains metal filters.

French Press is an immersion type of coffee brewing coffee method. First we Place the coffee grounds in the jar and pour boiling water over them. The coffee grounds remain immersed in the water for four to six minutes to extract the flavors. After that, we push the plunger, and the metal filter takes the coffee grounds to the bottom of the jar. And then, we simply pour the freshly brewed coffee into our cups.

The good thing about this brewing method is we have control over all the brewing parameters. And we can easily adjust these parameters according to our preference.

In contrast, all these parameters are not in our control if we brew coffee through automatic coffee machines. So, if you are like me, you might get bored drinking the same coffee every day. Sometimes we do need change. 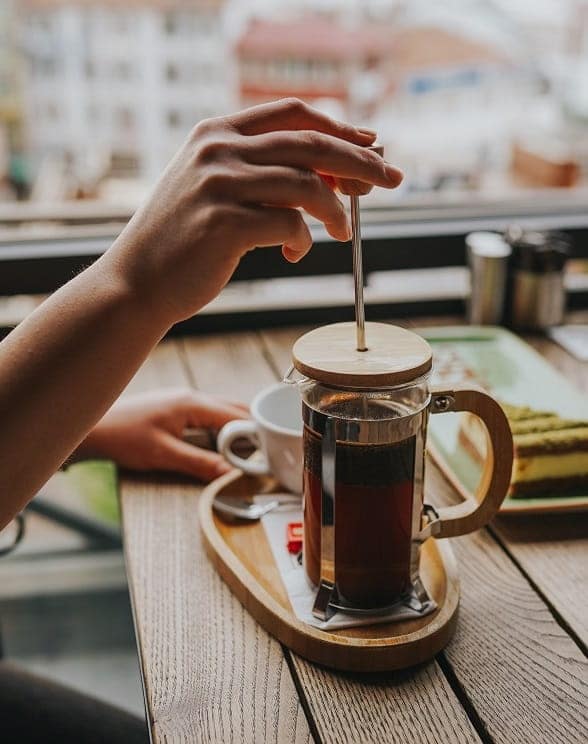 For brewing a 250ml cup of coffee, it is recommended to use 12-15 grams of coffee grounds. It is okay to use two tablespoons of coffee beans per cup if you don’t have a measuring scale.

There is no right or wrong grind size as long as you are in the coarse range; it simply depends on your taste. But if you find the brew is too bitter, try grinding a little coarser and if it’s coming out too watery, then try a little finer grind size.

Next heat the water in a kettle or stove. The best water temperature for French Press is 200 degrees.

When you are heating the water in an automatic kettle, you can adjust the temperature and set it at 200 degrees; if you are boiling the water on the stove, let it sit for 1 to 2 minutes after boiling so that it reaches the perfect temperature.

Before adding the coffee grounds, rinse the French Press jar with hot water. Although this step is optional, it is highly recommended since it keeps the coffee warm during steeping.

Stir the mixture after adding water for 10 to 15 seconds, then let it steep for 4 minutes. You can steep it longer than it if you want a more robust cup of coffee. But try to keep it under 6 minutes, as coffee gets more and more bitter with time.

After the four minutes have passed, you have two options; scoop off the foamy layer at the top or just push the plunger as it is. It’s better to scoop off the layer if you’re always complaining that French Press is too sludgy, but don’t do that if you enjoy the oiliness and richness in the flavor. As when you scoop off the layer many flavorful coffee oils also get out of the cup.

Now push the plunger and smoothly towards the bottom. You must move it slowly because if you push it too fast, many fine particles will make their way through the strainer, which will make your coffee muddy.

Now, pour the delicious and freshly brewed coffee into your cups and enjoy.

When was the French Press invented

As the name suggests, French Press was invented in France. However, the history of the French Press is not that clear. Some say that this brewing method originated in Italy, while others claim it was first used in France.

So, he used a metal strainer to keep the coffee grounds away from the cup while pouring it. He was expecting that the flavor of coffee brewed by this irregular would not be that good, but against his expectations, the flavor turned out to be very bold and rich. So, like many other good inventions in the World, the invention of this heavenly coffee brewing method was also an accident.

The first patent of French Press was filed in 1852 by two Frenchman named Mayer and Delforge. However, this design was not very similar to the design which we use now. This was merely a cheesecloth or metal piece fitted with the rod which keeps the coffee grounds away from the cup.

The first patent of modern French Press coffee maker was filed by an Italian man Attilio Calimani in 1929. So, some people might suggest that this brewing method is an Italian invention. But I am more convinced by the story that I have mentioned above as the name has French in it too.

Faleiro Bondanini made several changes to the existing design and came up with the most refined design of French Press that we use today. He patented this design in 1958 and started manufacturing it in France. He also markets this new design in the United Kingdom with the name La cafetiere. After that, he sold his patent to a famous kitchenware company in Denmark named Bodum. And Bodum is still the most popular company that manufactures French Press.

Still, after that many companies have altered the design of the French Press. Like you may have seen French Press coffee makers made of steel or stoneware, but the basic plunger assembly and the dimensions and design of the jar are almost the same as patented by Bondanini in 1958.

French Press became popular across all over Europe after its invention 1920s and became the most widely used coffee brewing method. However, it came to America in the 1990s after the Danish company Bodum started supplying this coffee maker to America.

French Press is the most affordable way to brew a cup of coffee. You can buy a good French Press coffee maker in under 25 dollars and you are good to go.

French Press coffee is rich in coffee oils and flavors since no paper filters are used in the brewing process. However, it is recommended to use paper filters if you are a heart patient or if you drink too much.

You can use it anywhere

As a very simple and portable method of making coffee, the French press is perfect for campers and backpackers.

Complete control over the brewing process

With French Press, you have complete control over the brewing process. To suit your taste, you can adjust the ratio of coffee to water, the water temperature, the coffee grind size, and the extraction time. This is a privilege you don’t usually get with automatic machines.

With all these benefits, the French press has some disadvantages too like it’s time-consuming and you have to do it all manually. The major disadvantage is this brewing method is not good for the health of heart, cholesterol and blood pressure patients. Read a detailed guide on whether the French Press is good for health or not.

Is French Press bad for you

Glass French Press coffee makers are perfect choice for beginners. They are very affordable and makes a perfect cup of coffee

Metal French Press coffee makers are perfect choice for if you are looking for something durable and long lasting. Insulated Metal French presses also keep coffee hot for longer.

There are many expert French Press coffee makers out there, but if you want to brew the absolute perfect cup of French Press, you’ll need an expert grinder too. Here are some of the best coffee grinders.

The water temperature is a significant factor in preparing a perfect cup of French Press coffee and Electrical Kettles are perfect for heating water. Here are some of the best electrical kettles

If you are a French Press lover, you must know that a perfect cup of French Press can only be brewed with coarsely ground coffee beans. Here are some of the best coffee grounds for French press

Points to consider while buying a French Press

What to look for in French press while buying

Although, if the material is reliable and the filters are adequate, french press of any material can brew a great cup of coffee. However, there are some benefits and drawbacks to using one material over another. In the post below, we have compared the advantages and disadvantages of using a glass, stainless steel, or ceramic French press.

In order to provide you with the best coffee brewing machines, we do proper research on new gadgets and machines.